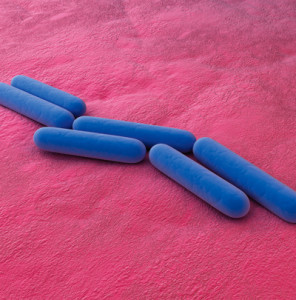 B. cereus is rod-shaped, Gram-positive, motile and endospore-forming.

B. cereus is facultatively anaerobic and grows optimally between 20° and 40°C. However, some psychrotolerant strains have been found to grow at 4°C. The spores, which can survive in inhospitable conditions, are resistant to heat, disinfectants, desiccation and radiation.

Most strains grow well on nutrient, blood and tryptic soy agar. Colonies are circular to irregular, large (2 to 7 mm in diameter) and hemolytic on sheep blood agar. 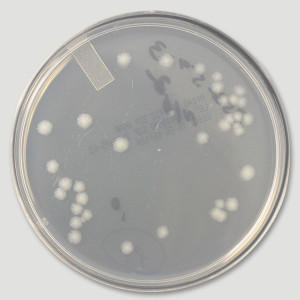 B. cereus is widespread throughout the world. The organism can be found in soil, fresh and marine waters, foods, milk, spices, feathers, leather, manure, plants, paper and sheep fleece.

B. cereus can cause two types of food-borne illness: the emetic type causes nausea and vomiting 1 to 5 hours after ingestion, and the diarrheal type occurs 8 to 16 hours after ingestion. Endophthalmitis may follow eye trauma and can lead to blindness when left untreated. The species has been known to cause keratitis in contact lens wearers. B. cereus may cause serious infections such as septicemia and pneumonia in neonates, alcoholics, drug-users and immunosuppressed individuals.

B. cereus may be introduced into a pharmaceutical production area through raw materials such as dry powders, cardboard, employees, clothing and dust. Spores can hide in cracked and damaged surfaces.

Bacillaceae. Genus: Bacillus. It is related to Bacillus anthracis the agent of anthrax in cattle and sheep. Other members of the genus include B. licheniformis and B. subtilis which have been implicated in a wide range of secondary or mixed infections in immunodeficient or otherwise immunocompromised hosts. Genus members, Bacillus circulans, B. coagulans, B. pumilus, B. sphaericus and B. thuringiensis, have caused occasional infections.