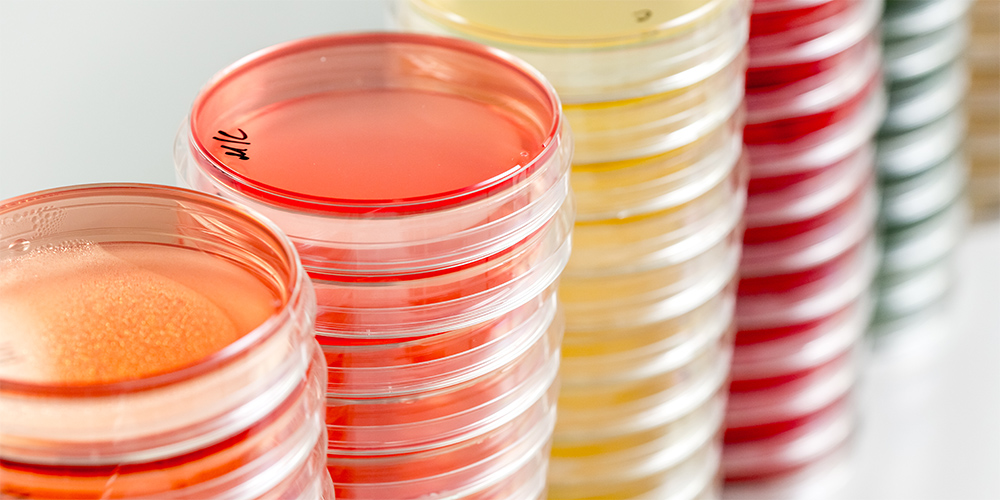 The U.S. Pharmacopeia (USP) created quite the challenge when it designed the growth promotion test (GPT) for selective media. Laboratories not only need to test new batches of media with less than 100 colony-forming units (CFU), the colonies must also grow on agars such as MacConkey within 18 hours. We’ve compiled nine best practices to help you become a selective media GPT expert.

For instance, if Tryptic Soy Agar (TSA) and MacConkey Agar are tested in parallel from an Escherichia coli suspension containing ≤100 CFU per inoculum, the E. coli will usually recover more colonies the nutrient-rich TSA than on MacConkey. From the E. coli’s viewpoint, growing on TSA is like eating a well-balanced diet containing plenty of fruits and vegetables, whereas growing on MacConkey is like eating nothing but potato chips.

2. Don’t worry about the factor of two

3. Confirm the number of CFU in your inoculum on non-selective agar

What if you recover no colonies when you inoculate MacConkey Agar with E. coli?  Does this mean the MacConkey Agar is unacceptable or that you have no E. coli in your inoculum? If you test a non-selective agar such as TSA in parallel with the selective agar, you can confirm whether there were viable E. coli cells in the inoculum. Remember, as mentioned above, there is no requirement for what percent recovery must be achieved when comparing non-selective to selective recovery.

4. Incubate plates in stacks of four or less

The USP puts a time limit on how many hours you can incubate your new batch of selective media before seeing growth. For example, colonies of E. coli should appear on VRBG agar within 18 hours of placing the plates in the incubator.

If you inoculate your agar with <10 CFU, it is possible you will get no growth when using media that is very selective.

If the mean assay value of your inoculum is less than 50 CFU per 0.1 ml on non-selective media, you can try doubling the inoculum to improve your chances of recovery on selective media. For example, if the mean assay value is 30 CFU per 0.1 ml on TSA, you can inoculate a new batch of MacConkey agar with 0.2 ml and still be under the USP limit of ≤100 CFU.

6. Use the environmental conditions required by the species

Results can vary with the type of media used. We have seen this when testing Pseudomonas aeruginosa on TSA. Below are our results when we inoculated six brands of media with 0.1 ml from the same suspension of P. aeruginosa.

Colonies often grow more slowly on pour plates compared to spread plates. For instance, you may need to incubate pour plates an extra 24 hours before you can see tiny Staphylococcus aureus colonies. A background light can help you spot them.

9. Use a standardized inoculum

By using a standardized inoculum of 10-100 CFU, you can avoid the unpleasant surprise of finding 120 colonies on your agar plate the day after you inoculated it with the suspension prepared with a turbidimeter.

Karla I. Fjeld is the Research and Development Scientist at Microbiologics. Karla received a Bachelor of Arts in biology and chemistry at the College of St. Benedict, St. Joseph, Minnesota in 2001, and a PhD in biochemistry and molecular biology at Michigan State University, East Lansing, Michigan in 2007. As the R&D Scientist, she works on both new products and product and process improvements.

Laurie Kundrat, MT (ASCP) has over 25 years of experience as a Microbiologist and a Clinical Technologist. Laurie is an active member of the Personal Care Products Council (PCPC) and serves as a member of the Microbiology Committee. She graduated from Case Western Reserve University with a degree in Biology. She also earned a Medical Technology degree from Fairview General Hospital.