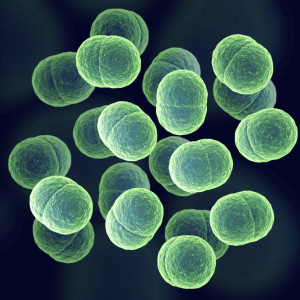 Staphylococcus epidermidis colonizes moist body surfaces such as the axillae, nares and toe webs. Normally a harmless species, S. epidermidis can cause clinical disease under the right circumstances. Predisposing factors include immunosuppression and the presence of a medical device such as a catheter. Because the organism is a human skin commensal, it is often seen where humans have been. S. epidermidis has been isolated from used cosmetics and on agar plates collected during environmental monitoring.

S. epidermidis consists of Gram-positive cocci that usually occur in pairs or tetrads. Since the species is coagulase negative, it belongs to a group of microorganisms called CoNS (Coagulase Negative Staphylococcus).

S. epidermidis is facultatively anaerobic and has a temperature range for growth from 15° to 45°C. However, the species grows best at 30° to 37°C in aerobic conditions.

Resides on the skin, mucosa, and nares of humans. Occasionally found on the skin of other mammals (often those mammals living close to humans).

S. epidermidis is an opportunistic pathogen and is a frequent cause of nosocomial infections. It is involved with urinary tract and wound infections as well as infections of indwelling medical devices such as catheters, prosthetic vascular grafts, prosthetic joints, and cardiac devices. Factors that increase the possibility of illness are immunosuppression, antibiotic resistance genes, the presence of a medical device, and the capability of some strains to form biofilms on medical devices. The biofilm helps protect the cells inside it from antibiotics and the host’s immune response.

S. epidermidis can be introduced during insertion of a medical device. It has been found in cosmetic products that have been used by the consumer. S. epidermidis has been isolated during routine environmental monitoring and has caused sterility failures during testing of sterile pharmaceutical products.