Mosquitoes, ticks, Cryptosporidium and Giardia. What do these blood-feeding and internal parasites have in common? All four are found in our home state, Minnesota, and cause diseases that increase with the arrival of warm weather. The Minnesota Department of Health (MDH), like other health departments around the world, keeps a close eye on these trouble-makers. 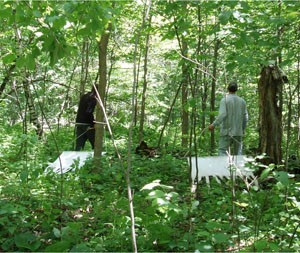 David Neitzel, MDH Vectorborne Disease Epidemiologist, has been tracking ticks and mosquitoes for years. In spring, David and his department colleagues (none of whom are wearing insect repellant) harvest ticks by dragging a large, white cloth through the woods. The ticks, which live on the forest floor, attach themselves to the cloth. Although it may seem ticks drop from the trees, it simply isn’t true. “If you find a tick on your head,” David says, “it crawled up there from near the ground.”

Captured ticks are brought back to the laboratory at MDH, sorted by species and tested for pathogens. Pathogens are identified using PCR (polymerase chain reaction) tests. One of the vectors is Ixodes scapularis, the blacklegged tick also known as the deer tick. This vector has a two-year life cycle which includes three feedings. During the first year, eggs hatch into larvae. The larvae feed on small mammals including white-footed mice which are a reservoir for disease agents. After the feeding the larvae molt into nymphs and become dormant until the following spring.

During the second year, nymphs, which are the size of a freckle, feed on large mammals such as white-tailed deer, dogs and humans. A nymph can transmit disease agents it is carrying from its first feeding. After the second feeding, nymphs molt into adults. Females feed a third time, lay eggs and die.

Blacklegged ticks can carry the agents for Lyme disease, human anaplasmosis, Babesiosis (formerly known as human granulocytic ehrlichiosis) and Powassan virus disease (also called deer tick virus). People bitten by the tick do not necessarily get sick. The tick must be a nymph or an adult female, must be carrying the pathogen, and must be attached for a long time – 12 to 24 hours for human anaplasmosis and 24 to 48 hours for Lyme disease. The deer tick virus is an exception. Studies suggest it only takes minutes of attachment to be transmitted. Even though not everyone gets sick from a tick bite, some unlucky people can become infected with more than one disease when they are bitten.

Lyme disease is caused by the spirochete, Borrelia burgdorferi. Victims develop a rash (typically with a bulls-eye appearance), fever, fatigue and other symptoms three to thirty days after being bitten. The disease is usually diagnosed based on physical symptoms and exposure to ticks, but sometimes laboratory tests are necessary. When this is the case, the Centers for Disease Control and Prevention (CDC) recommends a two-step process. The first test is usually an EIA (enzyme immunoassay) but could also be an IFA (immunofluorescence assay). If the first test is positive, an immunoblot (Western blot) test is performed for IgM or IgG depending on the length of the illness. Lyme disease is diagnosed only when both tests are positive. People are at risk for chronic arthritis and nervous system problems if the disease is not treated with antibiotics. 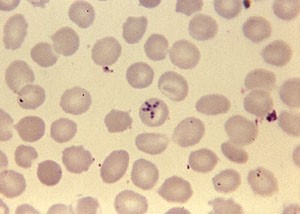 Unlike Lyme disease, many people infected by the parasite, Babesia microti, are asymptomatic. Severe symptoms, however, are possible in elderly, immunocompromised or asplenic people. A blood smear is used to diagnose the disease which microscopically can resemble malaria. A distinguishing feature in infected cells is a “Maltese Cross.” PCR and serology are other diagnostic tests.

A full list and descriptions of tickborne diseases in Minnesota can be found on the MDH website.

Mosquitoes, jokingly called the Minnesota state bird, are also monitored by MDH. David Neitzel said the insects are caught in a trap consisting of dry ice and a net. As the dry ice evaporates it emits carbon dioxide which acts as a bait. Mosquitoes equate mammals with carbon dioxide and fly into the net. Like the ticks, the mosquitoes are identified in the lab along with any pathogens they are carrying. Pathogens isolated at MDH include the agents for La Crosse encephlitis, Western and Eastern equine encepalitis, and West Nile virus.

The vector for La Crosse encephalitis is Aedes triseriatus, also known as the Eastern Tree Hole mosquito. It is found in wooded areas and gets its name from laying eggs in the pockets of water formed between trees with multiple trunks. Other breeding sites include old tires (a perfect incubator for mosquito eggs) and any container which can hold water. Interestingly, MDH saw a case of La Crosse encephalitis on the Minnesota prairie. Tree Hole mosquitoes had hitched a ride in water buckets from the forests of eastern Minnesota to the farmland in the south-central area of the state. Shelter belts of trees between farms provided a satisfactory environment.

A full list of diseases transmitted by mosquitoes in Minnesota or from residents exposed to mosquitos while traveling to tropical climates (including Zika virus) can be found on the MDH website.

MDH also conducts surveillance on Cryptosporidium and Giardia. The one-celled microscopic parasites cause water-borne diarrheal illness. Senior epidemiologist, Trisha Robinson, reports MDH sees a dramatic increase of cases of cryptosporidiosis during the summer months with over 50% of the cases occurring July through September. MDH routinely interviews infected people to find out where and how they became infected.

There are several species of Cryptosporidium. Crytosporidium parvum and Cryptosporidium hominis are the most common species infecting humans. Infected people or animals excrete oocysts in feces. People can be infected by swallowing contaminated water. Unfortunately, the parasite is tolerant of chlorine.

Swimmers and hikers become infected with Giardia duodenalis (also known as Giardia lamblia and Giardia intestinalis) by swallowing lake, river or pool water containing Giardia cysts. Cysts are passed in the stool of an infected person or animal. A person may need to swallow only ten cysts to become ill.

If cryptosporidiosis or giardiasis is suspected, a stool sample, duodenal fluid or small intestine biopsy specimen is collected and tested for the presence of parasites. Immunodiagnostic tests are preferred over microscopic methods because they are more sensitive, less labor-intensive and do not require a skilled microscopist. Detection methods, which are available as commercial products, include DFA (direct fluorescence antibody), EIA (enzyme immunoassay) and rapid, dipstick-like tests. Rapid immunochromatographic assays can test for both Giardia cysts and Cryptosporidium oocysts simultaneously. If microscopic methods are used, Cryptosporidium ssp. is detected using a modified acid-fast stain and Giardia intestinalis (lamblia) is detected using a trichrome stain.

More information about the diseases discussed in this article can be found on the MDH and CDC websites.

Microbiologics offers a variety of Parasite Suspensions from Ascaris to Trichuris. The parasites, fixed in formalin, are used for quality control of immunodiagnostic and microscopy tests, training and proficiency testing.