Raw Sushi – Does It Deserve the Bad Wrap? 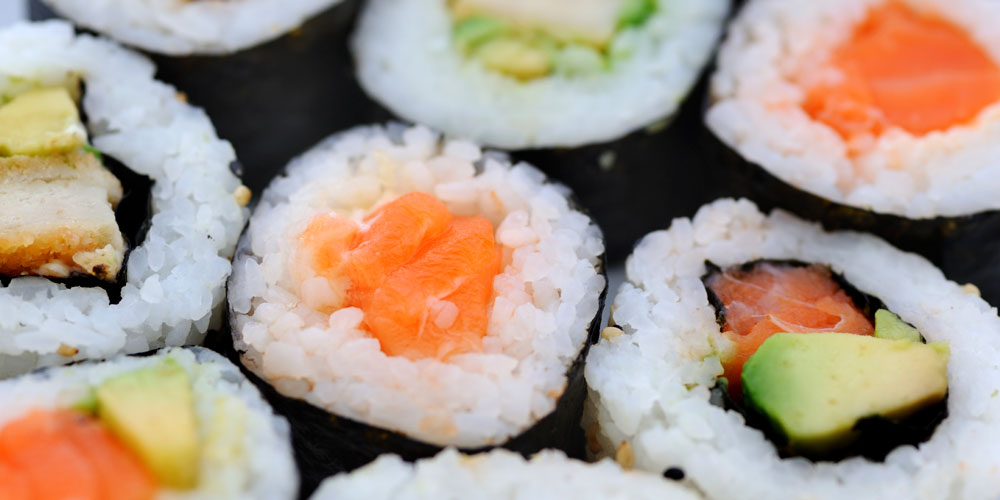 If you were to ask random strangers on the street if they liked sushi, I can almost guarantee you’d hear one of two responses. Either: “I love it!” or “That’s disgusting, no way!”.  In all my years of trying to persuade others to give it a try, I have yet to encounter a person who sort-of likes raw fish…  Sushi is just one of those things in life (much like cats) that people either love or hate – there is hardly an in-between.

So why the hesitation?  Sushi has been around in various forms for thousands of years.  If it were really that risky, wouldn’t we have realized it by now and sworn it off for good?  In reality, the answer is not that simple.  When prepared correctly, sushi is definitely one of the finer delicacies in life and is fully deserving of all the hype and cultural significance that it currently holds.  But bad sushi?  That can go horribly horribly wrong!  Let’s look at just a few of the ways this ancient culinary paradox can take a turn for the worst:

Two main parasites are to blame in this form of food poisoning: the Anisakis genus and Pseudoterranova decipiens.  Both parasites raise their larvae in the muscles of marine fish.  If you happen to notice a slight tingling sensation immediately after or while you’re eating raw fish, this is the worm moving around in your mouth or throat!  Seasoned sushi experts have been known to extract the worm manually from their mouth, or cough the worm back up to prevent infection.  Once the infected raw fish is consumed by humans, the larvae penetrate the esophagus, stomach, or intestinal wall causing symptoms of abdominal pain, nausea, and vomiting within a few minutes to several hours.  If you’re lucky, there’s a good chance that the resulting vomiting will expel the worm from your body.

Fortunately, neither Anisakis or Pseudoterranova can survive with humans as their host, and their life cycle will eventually stop there.  Your main option is to basically treat the symptoms until your new friends die out on their own.  Occasionally an anti-parasite drug like albendazole may be prescribed to speed things along.

A third type of parasite has been known to cause some issues when eating raw sushi – Diphyllobothrium latum.  This strain also lurks within the muscle tissues of fish.  After being consumed by humans, D. latum will take a ride all the way down to the small intestine.  From there, D. latum can continue its life cycle just as easily as in the fish it originated from.  Once happily implanted in your intestines, D. latum will begin its metamorphosis from larvae to full-blown adult worm – reaching upwards of 5 – 10 meters in length!

Unfortunately, there are very few signs of a D. latum infection.  If you’re lucky enough to be the 1 out of 5 people who do show symptoms, you may have some slight diarrhea, abdominal pain, or even weight loss.  For the remaining 4 out of 5 people wandering around with a small pet in their gut, your primary indication will be the eventual protrusion of D. latum’s tail from your rectum!  By this time, there’s also a good chance you’ve become slightly anemic and deficient in vitamin B12.  The good news is just one dose of the anti-parasite drug praziquantel will clear that all up for you in no time!  Whew, moving on!

Much less disturbing than D. latum, is the Gram-negative bacteria Vibrio.  This organism resides in salt water environments, most often as a free-swimming entity.  Vibrio does have a singular polar flagellum that it uses to move about the waters, and will also use this flagellum to affix itself to the surfaces of plankton, fish, and shellfish.

From there the rest is pretty much history.  Once Vibrio infected raw or undercooked shellfish (usually oysters) are consumed, you’ll have about 24 hours until symptoms of watery diarrhea, nausea, and vomiting set it.  This will last about 3 days and usually clears up on its own terms.  Only the immunocompromised are at serious risk to a V. parahaemolyticus infection.  The rest of the population will be told to drink plenty of fluids to replace the vast amount lost through diarrhea and vomiting.  There is little evidence that antibiotic treatments decrease the severity or length of a V. parahaemolyticus infection.

Hepatitis A – A Virus

This spring in the USA, the FDA recalled select imported frozen tuna fillets due to contamination with hepatitis A.  Although not normally prevalent in fish, it is possible for hepatitis A to be transmitted by water contaminated with infected human feces.  It is highly likely that the waters in which the fish were being raised contained such contaminants.

If you haven’t already been vaccinated for hepatitis A, you are at risk of contracting the liver virus.  Within 2 to 6 weeks after eating potentially contaminated seafood, the symptoms will finally begin to emerge: fatigue, nausea, pain in the joints or muscles, fever, and jaundice.  Being a viral infection, there aren’t options for treatment once hepatitis A is contracted.  Symptoms can persist for up to 8 weeks and you will be advised to rest and replenish all the fluids being lost.

Toxic heavy metals such as mercury are also a health concern when consuming sushi.  Predatory fish such as tuna, mackerel, swordfish, marlin, and sea bass contain more mercury than non-predatory fish such as clams, shrimp, flatfish, trout, octopus, and eel.  A 2011 study suggests that bioaccessibilty of mercury in fish can be reduced 40-60% by cooking and by the co-ingestion of tea and coffee. 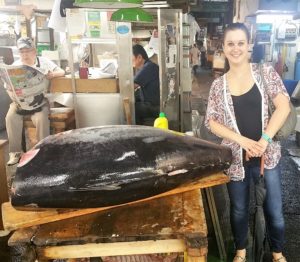 Microbiologics Proficiency Manager and blogger, Amanda Yasgar, standing next to a huge tuna fillet at the Tsukiji Fish Market in Tokyo.

Mercury poisoning can result in “pins and needles” in the extremities, lack of coordination, difficulty walking, speech and hearing impairments, and muscle weakness.  Pregnant women are warned to avoid sushi due to the dangerous neurological and cognitive affects mercury can cause to unborn developing fetuses.

With all this risk swimming around, who in their right mind does eat sushi?! Rest assured that you’re in relatively safe hands if you follow these top 5 sushi safety tips:

Go ahead and give good sushi a try some time, I dare you!