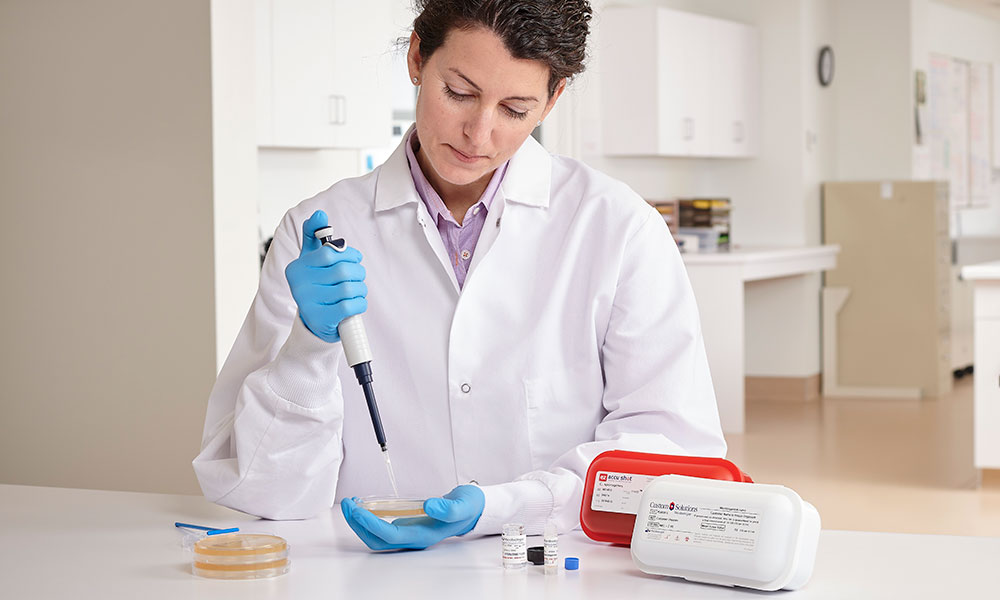 The growth promotion test (GPT) can be a hassle, but it’s necessary for determining if a new batch of media is acceptable. Follow our best practices below to make your testing process as smooth as possible when using Microbiologics products to perform GPT.

1. Test in parallel.
According to the United States Pharmacopeia (USP) Chapter <61>, growth on new batches of Tryptic Soy Agar, Sabouraud Dextrose Agar, and Potato Dextrose Agar must not differ by a factor greater than two from the calculated value for a standardized inoculum. The colony forming unit (CFU) value of the standardized inoculum can be determined by counting the number of colonies on the previously approved batch of agar.

We recommend testing a new batch of agar in parallel with the previously approved batch. Test in duplicate or triplicate. The average number of colonies on the new batch should be within a factor of two of the average number on the previously approved batch. By testing side-by-side, a laboratory eliminates all variables except the media. The microorganism suspension, environmental conditions, and technician are the same.

Remember, you do not need to worry about the factor of two when testing the growth-promoting properties of selective media. USP Chapter <62> states growth on the new batch of media should be “comparable” to growth on the previously approved batch. The new batch and the previously approved batch should be tested side-by-side. Read our 9 Tips for Growth Promotion Testing on Selective Media for more on this topic.

5. Be sure a homogeneous suspension is achieved.

6. Use environmental conditions required by species.

7. Keep organisms warm, but not too warm.

Learn more about isolate preservation and custom controls from Microbiologics.

Custom Controls for Environmental Monitoring
Microbiologics can simplify GPT for objectionable organisms in your laboratory. Send us your isolates for custom preservation and we’ll create a GPT kit designed for your laboratory with your isolates. Visit our website to learn more.

Read Next – Non-Sterile Pharmaceuticals: Next Steps After Finding an Environmental Isolate